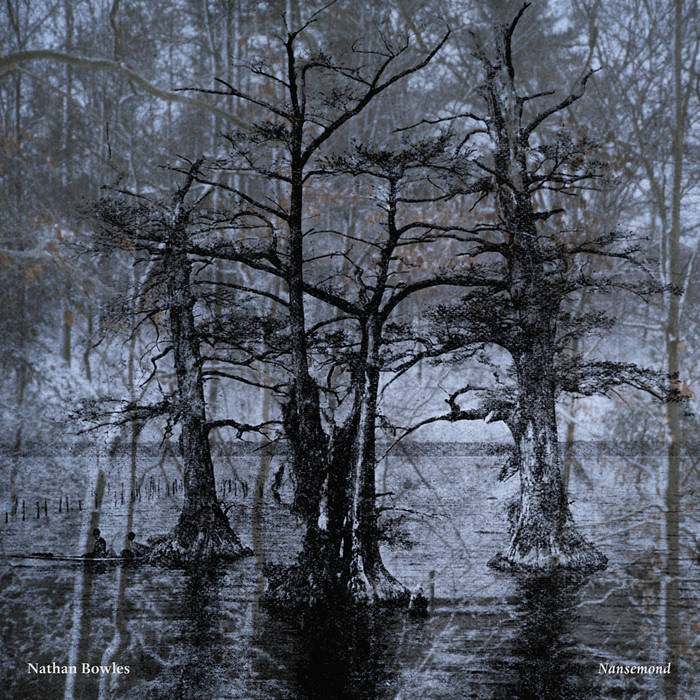 Mister Meows This isn't what I would expect from the banjo. I'd think it would sound like classic bluegrass, but Bowles sounds Takoma-ish to me, but much sunnier. Repeating loops and figures; new forms! Something true & eternal of the American south. Favorite track: Jonah/Poor Liza Jane.

wonderdog Banjo of the heartstrings.
Please read the relevant info at the "buy page" - well worth your time.
Fave track: #6.

It does not seem to me … that we understand the laws governing the return of the past, but I feel more and more as if time did not exist at all, only various spaces interlocking according to the rules of a higher form of stereometry, between which the living and the dead can move back and forth as they like … – W.G. Sebald, from Austerlitz (2001)

Nansemond is the name of a fading dream as much as it is a place name; the word has largely disappeared from maps of Virginia. The eponymous American Indian tribe, once part of the Powhatan empire but now numbering only 200 members, lent its name first to the Nansemond River, and later to a now-extinct county incorporated in 1646 but renamed in 1974. This region of tidewater Virginia was once predominantly underwater, beneath the blackwater and cypress groves of the million-acre Great Dismal Swamp, since drained to a mere fraction of its former span. Escaped African American slaves, as well as subjugated Nansemond Indians, took to these vast swamplands as fugitive maroons, lying out in secret settlements amid the labyrinthine morass. Now Nansemond is a ghost-choked locale, the tendrils of its spectral swamps grasping for purchase among parking lots, subdivisions, and peanut farms.

This is the wetlands landscape Nathan Bowles conjures with the cinematic suite of contemplative set pieces on his remarkable second solo album. Although he now resides in mountainous Southwestern Virginia, in a crucible of old-time music, he grew up on a body of water improbably called Sleepy Lake, on an estuarine peninsula surrounded by the Nansemond and James Rivers and Chuckatuck Creek. Nansemond aims at reconciling childhood memories, historical narrative, and recent life-changing events by revisiting the changing sites that connect and punctuate those hazy temporal nodes, both real and imaginary. It’s a record deeply engaged with how our memories colonize and transform a sense of place.

Although his recent solo recordings prominently feature his virtuosic banjo, Bowles is also widely recognized as a drummer, and he considers himself first and foremost a percussionist, with banjo as a natural extension of his interest in percussive drone. The seven songs on Nansemond deploy banjo, percussion, piano (his childhood instrument), tapes, and—for the first time—his robust voice to explore the rugged country between the poles of Appalachian old-time traditions and ecstatic, minimalist drone, moving effortlessly between composed sections, improvised passages, and field recordings. This forking-path approach follows his wide-ranging work as an ensemble player with the Black Twig Pickers (banjo, percussion), Pelt (struck and bowed percussion), Steve Gunn (drums, piano, banjo), Hiss Golden Messenger (banjo), Jack Rose, and others. For this record, he has assembled a sensitive group of collaborators from beyond the rosters of those groups: Tom Carter (guitar), Joe Dejarnette (guitar), Steve Kruger (fiddle, voice), and Jason Meagher of Black Dirt Studio (recording, production, mixing.)

Whereas his debut solo record A Bottle, A Buckeye (2012, Soft Abuse) concentrated on cracking the harmonic, rhythmic, and compositional possibilities of five-string banjo played in its deeply traditional, rhythmically specific clawhammer style, Nansemond expands the scope and scale of investigation exponentially. While still carefully articulating the subtleties of the banjo’s timbre, these new songs demonstrate the elasticity of Appalachian and Piedmont stringband music and the inherent connections, when those forms are distended, dilated, and dissected—as in the “Sleepy Lake” pieces, “Chuckatuck,” or “Golden Floaters/Hog Jank”—to contemporary improvised and post-minimalist avant-garde music. On this new set, Bowles digs deeper into the banjo’s fascinating nexus of African and European sonic cultures and its bridge between the menacingly alien and comically familiar vectors of Southern song, embracing its strange double life as preferred accompaniment to the most bone-chilling murder ballads and trance-inducing, syncopated country blues alongside the bawdiest minstrel comedy and goodtime hokum. (In the process, he incidentally renders utterly irrelevant the instrument’s recent pop resurrection as a signifier of spurious overalls-and-newsboy-cap Americana earnestness.)

On Nansemond the folk tunes “Jonah/Poor Liza Jane” and “J.H. for M.P.” (aka “John Henry”), chosen by Bowles for their resonant, evocative, and open-ended lyrics, provide ballast for the more atmospheric, less linear paddles through further reaches of the Great Dismal. Bowles’ inventive playing somehow finds common ground between tradition-bearing masters like Dock Boggs, Dink Roberts, and Etta Baker and the outré compositional experiments and extended techniques of Paul Metzger, Clive Palmer, and Henry Flynt. But these two strains always feel purposefully and organically integrated, not distinct or hierarchical, and that elegant and novel elision is perhaps the most notable accomplishment of these hypnotic recordings: they respectfully refuse to accept the porous boundaries between Southern vernacular music and modernism. It’s a sound, and an attitude, that’s hard to find on a map.

+ Available on 150g virgin vinyl as an LP, with full-color inner insert and LP labels, as well as on gatefold CD and digital formats