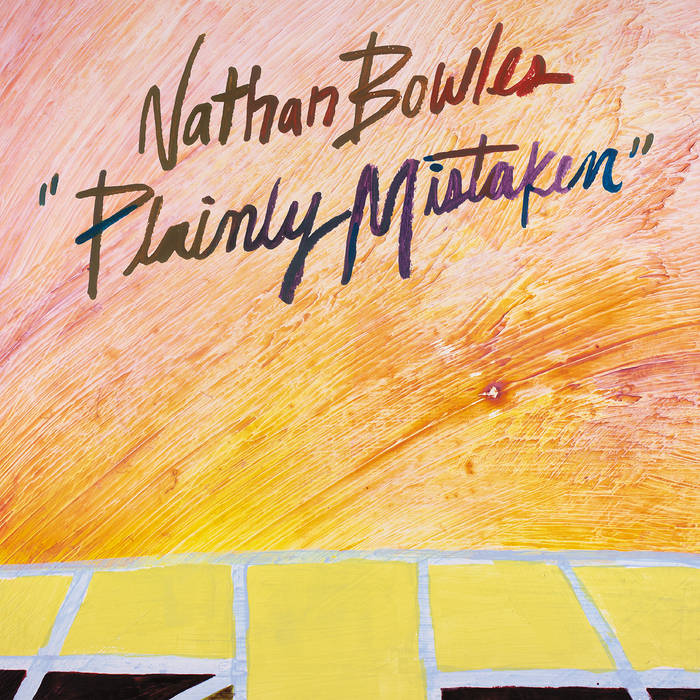 “Nathan is brainy and bookish and likes whiskey. He has that intense air that can fall away to mirth. His approach to music appears curious, knowledgeable, playful, intuitive, still. He knows he has a thing going on, and that he can apply that thing to things! To many different things. Maybe that thing is the grand blankness of seeing everything at once. Or maybe it is a pinhole vision that soothes and subjects in its narrowness.

“I think these new songs nurture their dialectic opposites, and that is their appeal—the drone has the aspect of melody, the melody has the aspect of drone. I don’t think Nathan has ever ridden a dolphin, but I think if faced with the task he would cotton quick. That’s how I see his approach to his music.”

Plainly Mistaken, the playfully subversive fourth solo album by Durham, North Carolina multi-instrumentalist Nathan Bowles, begins with a lullaby written by a child for an adult. The seven year-old Jessica Constable composed “Now If You Remember”—the titular lyric continues, precociously, “we were talking about God and you”—for English singer Julie Tippetts’s 1976 album Sunset Glow. Bowles’s ethereal rendering represents a rather radical departure from his previous recordings; his placidly plaintive singing has been stripped of its otherwise genial, ursine gruffness, and the brief song floats by on the sedative ebb tide of banjo and pianos both acoustic and electric.

Following that role reversal—a child assuming the role of parental bedtime bard—is the ten and a half minute-long album centerpiece “The Road Reversed,” a reversal (and vast expansion) of previous directions both sonic and congregational. Here, and throughout Plainly Mistaken, Bowles extends his acclaimed solo banjo and percussion practice into the full-band realm for the first time, showcasing both delicate solo meditations and smoldering, swinging ensemble explorations. “The Road Reversed” introduces the growling, bowed double bass of Casey Toll (Jake Xerxes Fussell, Mt. Moriah) and the rigorously precise minimalist drumming of Rex McMurry (CAVE), both of whom feature on five of the nine tracks herein and are integral to the record’s ambitious palette and limber but exacting rhythmic structures. “The Road Reversed” likewise introduces, and lays authoritative claim to, the full compositional extent and capacity of this unorthodox banjo-bass-drums trio, the spacious sonority of which might best be described as arboreal in texture and heft. No instrument impinges on the frequency of another—instead, they feel like towering ligneous parallels, great swaying longleaf pines that arc and bend perilously together in heavy winds, groaning in head-nodding 5/4 time but remaining upright and rooted.

Plainly Mistaken, its title apt, adjusts assumptions we might have made about the scope and scale of Nathan’s music, which sounds both more exquisitely controlled and more dangerously unleashed than ever before. We hear here his ever restless roving between the poles of Appalachian and Piedmont string band traditions and ecstatic drone. In the former category are his percolating full-band rerecording of Ernie Carpenter’s “Elk River Blues” (which previously appeared in a very different solo iteration on A Bottle, A Buckeye [2012]); “Fresh & Fairly So,” the indelibly careening melody of which could be an old-time standard; and “Stump Sprout,” the ghost of a misremembered reel. The latter category includes the solo recordings “Umbra,” “Girih Tiles” (played on the “mellowtone,” a custom banjo/bazouki hybrid instrument built by Rex McMurry’s father Maurice), and the improvised “In Kind” suite. However, never before has Bowles offered such a surprising, but succinct, crystallization of his diverse work with other groups—Steve Gunn, Pelt, the Black Twig Pickers, and most recently, Jake Xerxes Fussell’s band, in which he serves double duty on drums and banjo—made possible here by the fleshed-out full-band configuration and arrangements. Colleague and mutual musical admirer Bill Callahan writes of these scale shifts in Nathan’s music as, alternately, “the grand blankness of seeing everything at once” or “a pinhole vision that soothes and subjects in its narrowness”—the two conditions as, perhaps, two sides of the same equation of Panopticon-to-pinhole compositional logic. That also sounds like a description of spiritual jazz, or the trance context of gnawa song, both of which inform Bowles’s work here.

But this is not solipsistic music. Plainly Mistaken also gestures outward to the world, as Bowles considers the cycles of deceit and self-deception that shape both our personal and political lives. “I’ve come to the conclusion,” he writes, “that we’re generally ahistorical and snowblind, unable to adequately digest the past in order to live sufficiently in the present.” The album jacket includes a quotation from Javier Marías’s 2014 novel Thus Bad Begins: “We go from deceit to deceit and know that, in that respect, we are not deceived, and yet we always take the latest deceit for the truth.” It might be funny if it wasn’t so devastating.

And so a mixed mood of melancholy and merriment permeates Bowles’s own compositions as well as the interpretive material. His rambunctious and exuberant version of Cousin Emmy and Her Kinfolk’s 1946 proto-bluegrass classic “Ruby,” the other vocal track here—elided with “In Kind I”—draws primarily from the 1968 version by Silver Apples instead of the canonical versions by the Osborne Brothers or Buck Owens, thereby embodying a tribute to a palimpsest of bluegrass-meets-avant-garde iterations that perfectly suits Nathan’s own practice. In its trio-fueled headlong canter, “Ruby” feels unhinged and manic, a sinister interrogative mantra that encapsulates the slippery cycle of deception and stuttering accusation that plagues our contemporary cultural moment.