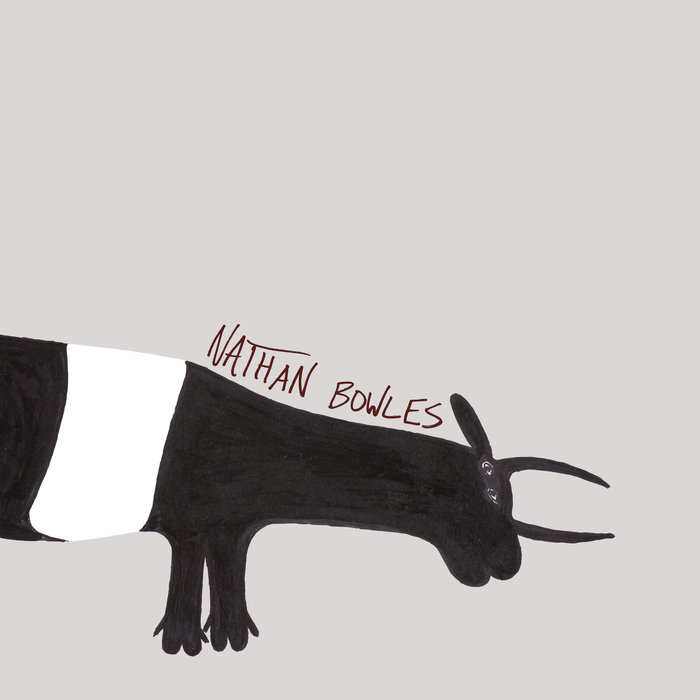 “Learn the true topography: the monstrous and wonderful archetypes are not inside you, not inside your consciousness; you are inside them, trapped and howling to get out.”

The jacket artwork (actual, physical) for Whole & Cloven, the arresting new album by multi-instrumentalist Nathan Bowles, features a monochrome silhouette of a bull stretched to freakishly attenuated, Mannerist proportions, its stylized austerity belying the finely rendered anatomical details: horns and hooves, tail and testicles. Spanning front and back jacket panels, the bovine is cloven by the jacket’s spine, but also by its own animal architecture—a bright white stripe bisects its hide between head and hindquarters, interrupting its own body’s otherwise inky expanse. This bull totem—a detail from an untitled painting by Alabama vernacular artist John Henry Toney, which Bowles acquired from the artist while on tour—recalls both the work of fellow Alabaman self-taught artist Bill Traylor and Picasso alike, demonstrating the interpenetration of modernism and Southern folk forms. It’s an apt visual analog to the album itself, which examines, at both formal and emotional levels, and with a stirring sense of scale and scrutiny, both the aesthetics of discontinuity and the intersecting syntaxes of Appalachian string band traditions and avant-garde composition.

Since his last album Nansemond (2014), Bowles has sustained and strengthened his fruitful relationships as a ensemble player with Steve Gunn (drums, piano and organ, banjo); the Black Twig Pickers (banjo, percussion); and Pelt (struck and bowed percussion), while undertaking projects with new accomplice Jake Xerxes Fussell and old friend and mentor Michael Chapman, all of which inform this record. But he has also continued to refine his solo practice, carrying it far beyond the confines of any reductive and rote solo banjo designations. On this third solo album, his most exquisite, immersive, and ambitious to date, he again augments his mesmeric clawhammer banjo pieces with piano, percussion, and vocals (mostly wordless, some wordy). The result showcases the full range of Bowles’ compositional and performative versatility.

Instead of the programmatic place-based narratives of Nansemond, the seven songs on Whole & Cloven offer a stoic meditation on absence, loss, and fragmentation, populating those experiential gaps—the weighty interstices and places in-between—with stillness and wonder. Whereas its predecessor was directly inspired by the mutating environment, and his mutating memories, of his childhood home on the fringes of the Great Dismal Swamp in Virginia, the new album turns inward, exploring inscapes rather than landscapes. Since Nansemond, Bowles has moved from the mountains of Blacksburg, Virginia—his longtime home—to the Piedmont city of Durham, North Carolina, an uprooting and displacement that perhaps precipitated the divergent iterations and forking paths on display here. The overriding sense of rupture and return is also perhaps suggestive of the frailty and solidity of human relationships, familial and romantic—they way we live alternately as halves and wholes. But Whole & Cloven doesn’t require a linear, unified narrative; its richly detailed, diversified sonic topography—multifaceted, mosaic, mercurial—is captivating enough on its own.

Whole & Cloven unfolds as a series of seven discrete, but interrelated chapters. The album is bookended symmetrically by the two recordings that bear the most immediately discernable, and brightest, shapes. Opener “Words Spoken Aloud” (wordless, naturally), with its buzzing percussion and crisp progressions, serves as an invocation, prefiguring the concluding “Burnt Ends Rag,” a post-ragtime number inspired by Bowles’ friend Jack Rose, Dr. Ragtime himself. The gorgeous piano instrumental “Chiaroscuro,” which wouldn’t sound out of place on a Terry Riley album, ripples with liquid ostinatos, showcasing Nathan’s facility on his first instrument. “Blank Range/Hog Jank II” and “Gadarene Fugue” each skitter along with dark urgency, gnawing and diving respectively, the former comprising two haptic halves sutured together, and the latter drawing obliquely from Moroccan Gnawa traditions.

Though “Blank Range” prominently features Bowles’ voice, “Moonshine is the Sunshine” is the sole song with lyrics, providing some levity in the form of absurdist, rustic koan-couplets: “My family, they’re just a tree, I’m just one of the branches/I know a man who hates to farm, but he owns a hundred ranches”; and (our favorite), “The moonshine is the sunshine, shining twenty minutes later/and ‘crocodile,’ that’s just another name for ‘alligator.’” It’s a Jeffrey Cain cover, twinning elements of two different versions: the original, from his debut For You (1970), and the version from Whispering Thunder (1972), both released on Jesse Colin Young’s Raccoon Records (briefly home to Michael Hurley, the Youngbloods, et al.) Album centerpiece “I Miss My Dog” contains teeming multitudes of memory and regret in its eleven vaporous minutes, crawling from stately, deep-water soundings to torrents of hiccupping, densely woven banjo and piano latticework redolent of anxious longing. It sounds like storm-blown rain.

As a whole (ahem), Whole & Cloven repeatedly swaps lenses, wide angle for macro, demonstrating a new comfort with long shots and close-ups alike. Inside the record jacket (actual, physical), Bowles himself, in a photograph by Brad Bunyea, spreads jam on a biscuit—split, of course—with an unnecessarily sharp knife, head tilted quizzically, grinning wryly. He looks like a guy who’s maybe learned the true topography.

+ The third solo album by multi-instrumentalist Nathan Bowles (Steve Gunn, Pelt, Black Twig Pickers) is his most exquisite, immersive, and ambitious to date.

Nathan's music is marked by both his deep study of vernacular American forms and his years-long dedication to the development of his own voice. He is a musician who respects tradition as he values experimentation, an artist whose work commands careful listening. This balance is what makes Nathan's voice singular: as a player, he is fearless, challenging. And as a listener, I am grateful and inspired.

Wry, sad, troubled, and mesmeric compositions imbued with a spooked and grainy Appalachian potency. Rich chaparrals of deep buzzing color you could lose yourself in forever.

He could play forever without boring himself or anyone listening.

A portal through time.

Stunning. A Terrence Malick film with just a handful of strings.

I have huge respect for Nathan as a musician on so many levels.

Nathan Bowles is like my spirit animal. It’s the real shit … beautiful then, beautiful now. Timeless.

Mesmerizing! "America's Instrument"—the 5-string banjo—has found a profound new exponent in Nathan Bowles. His writing for the instrument is exploratory, at times wonderfully dissonant and always soulful; his playing sure-footed and hypnotic. One of my favorite musicians playing today.

A stunner from start to finish. It’s a transporting collection of sounds that fuses age-old Appalachian traditions with cosmic drones, in the process creating something that sounds fresh and vital to these ears. The long, deep solo rambles that take up a good portion of the record are beautiful excursions that conjure up strange and spectral southern landscapes. Nansemond is mostly instrumental, but Bowles is nothing if not a storyteller, taking you on an evocative, transfixing journey.

Hypnotic. Like John Fahey, who conceived of American Primitive Guitar as a means of purging inner demons, Bowles has turned his emotions, memories, and preoccupations into a multifaceted work of art that can draw you in even if you don't know a thing about the guy that made it.

Truly a revelation. It's a supremely visceral, fried slice of backwoods Americana... an updated vision of traditional American song form without the pastiche.